I’ve been working on my One Thing…what have YOU been doing?

You may have noticed a distinct lack of blogging on my part in recent months. This wasn’t intentional but something happened last November which has had a profound effect on my work since the beginning of the year and I thought I’d share…..

I joined a new Mastermind group last November. I’ll probably write a post about the Mastermind process another time but in a nutshell, it’s a small group of business owners from a variety of different industries that meet every other month, all of whom have a common objective: to help each other move our businesses forward.

During one of the sessions, a member of the group said something to me that took me aback. I’d been talking about the issues in my business and the things I was currently working on. This very switched on individual who had the benefit of viewing my business from 10,000 feet said, “You do know you’re procrastinating, don’t you?”

Frankly, I was a bit insulted. Procrastination is something I’d normally associate with skyving. Watching Facebook videos of cats (they’re so cute!). Sneaking off early, arriving late, browsing the internet…..just not working. And that isn’t me, I thought to myself. I work really hard.

And yet, here was a seriously smart guy telling me that I was procrastinating. He then proceeded to explain that even though I’d highlighted the key areas of the business that needed to be worked on, I was doing anything but working on them. I was working hard, sure, but I was working on the wrong things. Tasks that should have been delegated. Non-critical project work. Easy stuff. Work that I’d been saying to myself that if I could get completed then I could focus on the big projects.

My actions weren’t congruent with my goals. Classic procrastination.

Someone then suggested that I read The One Thing by Gary Keller which I did during the Christmas break. What a revelation! 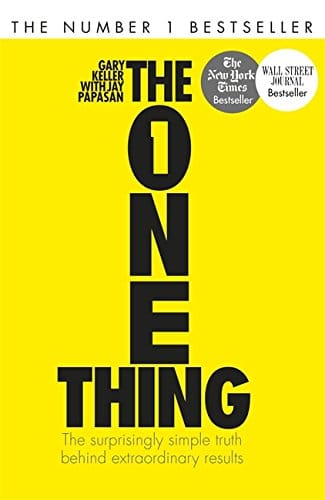 The concepts behind the One Thing are really simple and at the risk of doing the book a massive disservice, here are my main takeouts:

Determined to put what I’d learnt into practice I decided to change my routine. I’d get into work at 8 am. I’d turn my phones off, shut down my email client, log out of any chat clients, shut my door, put a Do Not Disturb sign on the door and put my earphones on. NO procrastination.

And that’s the way it would stay until 12 pm. Every day. So I could focus on the big stuff. This took a lot of effort. Moving away from the always available mindset was difficult particularly for my team who were used to getting access to me whenever needed. Focusing on the big stuff for large tranches of the day inevitably means that a lot of the little stuff gets neglected. The To Do lists get bigger. You don’t respond to people as quickly as you normally would. You get the creeping feeling that you’re losing control.

I know some of you might be thinking this sounds like a nightmare. But the reality is that it doesn’t take long for people to get used to your routine and to work around it, even customers (in fact it was a customer that suggested it to me in the first place). My team have been hugely supportive and our CTO has now also adopted the practice.

More importantly, I’ve achieved more in the first 3 months of the year than in the previous 12 and have been slowly chipping through those projects that had sat on the ‘too hard’ pile for a long, long time.

So the question I’d ask you is: what have you been working on today and how does it support your long-term goals? If you don’t have a clear, definitive answer to this question then you need to read The One Thing.

We’ve finally caught up with the cool kids and released our own dark mode, accessible now in the Invoco portal. What do you think? Setting it up is mega easy. Just log into the portal, click into your ‘settings’ tab; Click ‘other’… Turn it on! Let us know if you’re looking for anything else to […]

Bill shock. None of us want that. At Invoco we try and keep our call costs as competitive as we can as we want to provide our customers with excellent value for money but some numbers are just really expensive to call. Premium rate numbers, for example. 084 numbers. Certain international destinations. Even worse… premium […]

Do you ever have that sinking feeling half way through the bank holiday weekend that you’ve forgotten to set your incoming calls to go to voicemail and that your phones have been ringing out unanswered? Or perhaps you meant to forward calls to your call answering service or an on-call engineer? Wouldn’t it be great […]